Set in stone: how the ancient craft of stonework can transform your home design project 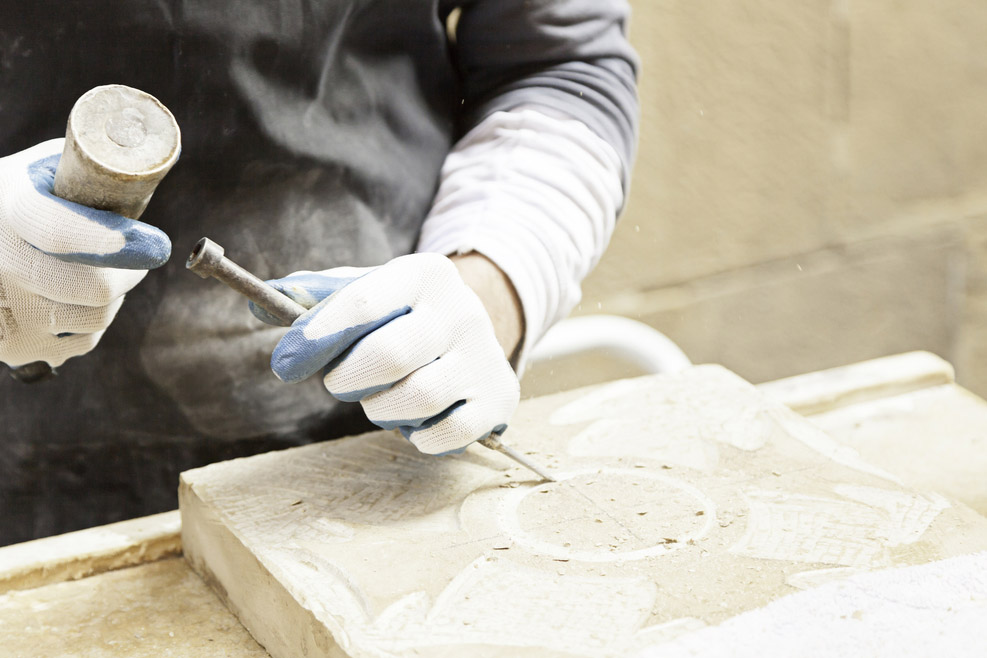 For stonemasons, or anyone seriously interested in stonecraft – one of the oldest professions in human history – visiting the Great Pyramid of Giza is not so much a tourist activity as a rite of passage.

Built for the Pharaoh Khufu during the third century BC, the Great Pyramid is the only one of the original Seven Wonders of the Ancient World that is still standing today. Little wonder, really – the pyramid was built with an estimated 2.3 million stone blocks, each one weighing between 2 and 15 tonnes. It’s the epitome of ‘built to last’.

From a distance, the Great Pyramid is a tawny, golden yellow, but it was not always thus. In its heyday, the entire structure was encased in massive slabs of polished white limestone that sparkled and shimmered in the blazing Egyptian sun. (The limestone facades were stripped away long ago, used to construct mosques, fortresses and other buildings.)

It’s when you get up close, however, when you lay your hands on stonework that has remained resolutely in place for more than two millennia, that the real miracle of the Great Pyramid becomes evident. The giant blocks fit together with such precision that many of the joints are virtually invisible; around and around, millions of mighty stones locked together year after year, towering into the sky. How on earth did they do it?

Modern engineers have concluded that the ancient Egyptians built a ramp that spiralled up and around the pyramid, on which the stones (having first been quarried and transported to Giza along the Nile) were dragged up and manoeuvred into place using dolerite ‘ball-bearings’. Once in place, skilled craftsmen would sculpt each block into its final position, chipping and honing the stone until it fitted perfectly.

For complexity, durability, precision-finishing, not to mention sheer scale, the Giza pyramid is perhaps the greatest feat of engineering that humans have ever accomplished. Well worth a visit!
Stone has been used as the primary material in the creation of some of the world’s most famous and long-lasting shelters, temples, monuments, artifacts, castles, fortifications, and even entire cities (the Stone Town part of old Zanzibar in Tanzania is something of a giveaway;

Ireland too is rich with examples of ancient stonemasonry including stone circles, burial chambers, dolmens and forts. Here in Drumleck, we are only 20 minutes up the road from Newgrange, one of the most famous Stone Age monuments anywhere in the world and the crowning glory of Ireland’s Ancient East – more on Newgrange in our next blog.

These projects include kitchen islands and vanity tops for kitchens, pantries, boot-rooms, utility rooms and other spaces, where the timeless craftsmanship of the stonemason shines through in a contemporary setting. The elegance and beauty of our creations is underpinned by durability, with stone of course one of the toughest and longest-lasting substances on the planet.

We work with a variety of stone including marble, granite, natural quartz and limestone, quarried into raw blocks around the world and processed into slab material. The slabs are then brought to us for finishing, where we collaborate with skilled stonemasons and craftspeople to create unique pieces for the home.

We also blend specialist knowledge of traditional stonecraft with modern production technology and sophisticated machinery to produce the best results: magnificent examples of stonecraft for both inside out outside the home.

For clients who wish to use stone as an integral or significant part of their home development project, there are many considerations – both practical and aesthetic – that will have to be worked through. This is where we come into our own, drawing on years of experience to guide and support clients with strong ideas and big visions.

Schedule a callback
Book a showroom visit
We use cookies on our website to give you the most relevant experience by remembering your preferences and repeat visits. By clicking “Accept”, you consent to the use of ALL the cookies.
Cookie settingsACCEPT
Manage consent

This website uses cookies to improve your experience while you navigate through the website. Out of these, the cookies that are categorized as necessary are stored on your browser as they are essential for the working of basic functionalities of the website. We also use third-party cookies that help us analyse and understand how you use this website. These cookies will be stored in your browser only with your consent. You also have the option to opt-out of these cookies. But opting out of some of these cookies may affect your browsing experience.
Necessary Always Enabled
Necessary cookies are absolutely essential for the website to function properly. These cookies ensure basic functionalities and security features of the website, anonymously.
Functional
Functional cookies help to perform certain functionalities like sharing the content of the website on social media platforms, collect feedbacks, and other third-party features.
Performance
Performance cookies are used to understand and analyze the key performance indexes of the website which helps in delivering a better user experience for the visitors.
Analytics
Analytical cookies are used to understand how visitors interact with the website. These cookies help provide information on metrics the number of visitors, bounce rate, traffic source, etc.
Advertisement
Advertisement cookies are used to provide visitors with relevant ads and marketing campaigns. These cookies track visitors across websites and collect information to provide customized ads.
Others
Other uncategorized cookies are those that are being analyzed and have not been classified into a category as yet.
SAVE & ACCEPT